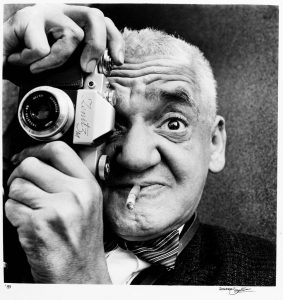 Asher Fellig was born at the turn of the 19th and 20th centuries in the town of Zolochev, which at that time belonged to the Austro-Hungarian Empire. After 11 years, the boy and his family moved to live in New York, where he changed his name to Arthur. The life of an emigrant made the teenager start working at the age of 14. He changes several places before becoming an assistant photographer. This event, apparently, radically influenced his future fate. Arthur began to work as a street portrait painter with a pony nowhere without special training, then he became a laboratory assistant at a photo studio. Working during the day in the studio, at night he went on a “photo hunt”. Now, the life of New York at night during the Great Depression is considered a certain style and distinctive sign, created, including, by such a talent as Viji.

In 1935, Viji (born Weegee, Wee Gee – the pseudonym of Arthur, meaning the name of the game with predictions and consonant with the signal of a police siren) chooses the path of an independent photojournalist. In addition to his creative abilities for photography, he also had a phenomenal instinct and organization. Viji sold his staff to the best newspapers in New York, his colleagues could not surpass him in efficiency. Fellig was a master. In the trunk of his Chevrolet, he organized a mobile photo lab. Thanks to this, morning newspapers were full of pictures taken at night. He said: “For me, photos are like pancakes. I have to get them while they are hot.”

In 1938, Viji got the opportunity to use the radio at the police frequency. This allowed him to be at the crime scene almost earlier than law enforcement officers. His pictures of murders, accidents, fires fully met the needs of the “yellow” press.

In 1941, Arthur hosted the first professional photo exhibition, which was called Viji: Murder is My Business. Despite the cynicism of the name, which, of course, was present in the works of Fellig themselves, the artistic value of his photographs cannot be denied. Over the years, they have become classics. Photos of the dead and accidents are made in compliance with all the rules of composition.

Photobooks were a huge commercial success. Their names perfectly reflect what Viji pictured. The city at night saw everything: luxury and poverty, gangsters and prostitutes, brothels and operas, murders and suicides. Arthur surprisingly felt aesthetics in every manifestation of New York life. Cabaret dancers, drunkards, street vendors fell into the sight of his camera.

Viji loved to shoot kissing couples. Young romantics in cinemas, ladies and gentlemen with gray hair, passionate lovers – all people came to life in Fellig’s photographs. Each little thing helped to reveal an interesting story to the viewer. These were all “Viji people,” he loved, knew, felt them.

At 48, Fellig married and moved to the west coast. His marriage did not last even three years, but during his life in Hollywood, Vigi gains new experience: he consults at film studios, makes films himself and even gets episodic roles. Returning to New York gave a new round to Fellig’s creative career. He began to create amazing caricature portraits of celebrities.

To achieve this effect, Viji had to mount special nozzles on his camera. Later, these and other photos of the author were in the book “Naked Hollywood.” Lisa Minelli, Pablo Picasso, Audrey Hepburn, Louis Armstrong, Marilyn Monroe, Barbara Miller, Lucy Baines Johnson, Salvador Dali and other famous people of that time fell into the lens of a genius.

In 1957, Arthur’s health worsened, he was diagnosed with diabetes. The last 11 years of his life, Wilma Wilcox became a faithful companion for the photographer. It was she who carefully preserved his huge photo archive.

Until his death, Fellig led an active professional life. He collaborated with Stanley Kubrick, was a full-time photographer on the set of the anti-militaristic satire “Dr. Strangelove, or how I stopped being afraid and loved the bomb.”

Arthur traveled to Europe and the USSR, gave lectures, held exhibitions, continued to shoot reports for the best American and European newspapers. During this period, an autobiography of Viji about Viji was written.

At 69, Viji passed away in New York. His work has become a reflection of the era and classics of criminal photojournalism. Viji’s photos are filled with the life of a big city, where every passer-by looks with rapture at even the most terrifying event.