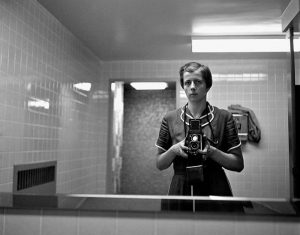 The story of the American photographer Vivien Maier (© Vivian Maier) is an interesting case of fame that came to the photographer only after death. Nobody saw her carefully assembled archive of almost one hundred thousand negatives, it was discovered by chance, and made a real international sensation.

A detailed and distinctive illustration of the life of American society of the 60s and 70s, funny street plots and surprisingly characteristic portraits do not leave anyone indifferent. In terms of professionalism, ability to approach the model and reveal her personality, Meyer is compared with Robert Frank and Lee Friedlander.

Art lasts forever and works outlive their creators who serve only as “guides” between creativity and the viewer. Unfortunately, the name Mayer became known only after her death, and she did not receive the recognition she deserves. Today Vivien Meyer glorify the pictures taken by the medium format Rolleiflex camera, with which she almost never parted. Friends called her “Mary Poppins with a camera” – Vivien worked as a governess in wealthy Chicago families.

Perhaps because of the gender and social barriers of the mid-twentieth century, a woman did not try to become famous during her lifetime – or she tried, but unsuccessfully. Today’s researchers know very little about her personality and history. This also shows the uniqueness of the photographer – only her work speaks for her, we create an impression of personality through the prism of talent.

Meyer’s style is careful observation of reality and precise “grabbing” of interesting and eloquent details from the colorful canvas of American life. From her works, we can get a complete, voluminous idea of ​​how high society looked and what it breathed on, and wealthy classes, among which lived a photo artist, see what scenes unfolded in the streets and parks of Chicago, what the townspeople wore and how they expressed their emotions .

Meyer’s photographs are not impartial illustrations, but formed plots that give the author an extraordinary narrator, bright, with a sense of humor and an active social position. In a year, Vivien made at least 200 films, showing them in her room (she made her a photo laboratory) – this is the level of a full-fledged professional. Moreover, she had the main job. She was not going to exchange her for a career as a photographer, but she carefully organized and stored the archive. It was discovered by accident.

In 2007, 26-year-old Chicago resident John Maloof decided to write a book about his hometown. A professional real estate agent, he accidentally got to the sale of a storage warehouse, where he decided to buy several boxes belonging to no one, which were disposed of due to non-payment for the place. Having paid $ 400, he received more than one hundred thousand captured films and negatives and decided to scan them and show photos. Looking at the finished pictures, he immediately realized that there was a treasure in front of him.

The archive contained magnificent photographs taken in the genre of street reporting, 3,000 photographic prints, amateur documentaries on eight and sixteen-inch films, and interviews with Chicagoans recorded on a tape recorder. In addition to the main part, bought by John, there were other pictures in the archive – they were sold to Ron Slatteri and Randy Pro. They posted some photos on their blogs, but did not cause a public outcry.

That all changed when Maloof posted the photos on Flickr hosting. Having posted several pictures on an authoritative photo blog, he immediately received about two hundred offers – he was asked to organize exhibitions, make a documentary about the author and tell her story. John bought the remaining parts of the archive from the co-owners and became the owner of more than 90% of the pictures and the rights to publish them.

Maluf had to spend a lot of energy to find out who made the photos that caused such a stir among professionals. Meyer’s name was written on one of the boxes John bought. He began to search for relatives and acquaintances of the photo artist and was able to contact the two families in which she worked as a governess. One of them handed Maluf Vivien’s personal belongings – boxes with newspaper clippings, developed photographs and photographic equipment, photograph albums that belonged to her, notes and payment documents. Based on them and the stories of the pupils, it was possible to restore information about the photographer, since John could not find her living relatives.

Maloof began organizing exhibitions of a photo artist. The first one took place in Norway in 2010, then the expositions opened in America and in other countries of Europe and Asia. A year later, the book about Mayer Out of Shadows saw the light, and another three years later, in 2014, a lawsuit was filed against Maluf to protect the rights of the alleged heir.

CAMERA DIAPHRAGM AND DOF WITH SIMPLE LANGUAGEAnyone who is not too lazy and read the instructions for the camera may not read further. But for those who are too lazy to do this - perhaps there…