NICK NIGHT: WELCOME TO THE WORLD OF FUTURISTIC AND FUNNY FASHION FILMING 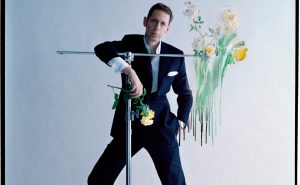 “I feel that I exist in the future. And, I will tell you, this is an unusual place!”

Nick Knight is associated with fashion photos, moreover, he is inextricably linked with the fashion world. But the photographer cannot be called “one of.” In contrast to the photographs of many figures in this direction, his work is distinguished by innovativeness and non-standard. Knight’s photos are amazing. It does not reflect trends, it sets them.

The future cult photographer began his career, like many, with a simple passion for photography. It helped him impress the fair sex.

Nick was born in London on November 24, 1958. His family held very democratic views on raising children, so the boy always felt support from his parents in all his endeavors.

Knight’s mother was a physiotherapist, and her father a psychologist, which affected the level of free thinking in the family. Already in his teens, a rebellious spirit awoke in a guy. His protest against the “totalitarian” school system was expressed in thoughts, behavior, appearance. Nick despised his uniform, wore defiantly long hair and used a make-up. Later, his hairstyle will change, and he will join the ranks of skinheads popular in the 70s. In England in those years, the skinhead subculture had nothing to do with racial hostility, but expressed only contempt for the bourgeoisie and the hypocrisy of society.

By the time he finished school, Knight clearly understood that his passion for photography and the lack of abilities in the natural sciences crossed out all sorts of initial hopes for a medical career. The young man chose Bournemouth and Poole – a college of design and art. In 1980, Nick’s graduation work was a selection of monochrome portraits of his skinhead buddies, and after 2 years she released a separate photo book.

This is the starting point in Knight’s successful career. Robin Derrick – an influential person in the fashion publishing industry, at that time the creative director of i-D magazine, drew attention to the work of Skinhead. Derrick liked her so much that he ordered the young talent a hundred black and white portraits to be placed in the anniversary issue of the magazine. Nick masterfully completed the task, which greatly impressed Mark Ascoli, art director of the publication. In 1986, he personally invited Knight to collaborate with Yoji Yamamoto. Nick had to remove the designer’s catalog with Naomi Campbell. In the process, the photographer also involved the artist Peter Savill. The success of the project was so great that Yamamoto extended the contract with Nick until 1997.

In 1982, a girl came to the photo studio hosted by Knight for an internship. She turned out to be Charlotte Wheeler, who later became the wife of the maestro. Nick’s strong marriage is the exception rather than the rule in a fashion party. The photographer still lives happily with his Charlotte and three children in London.

In addition to fashion projects, the photographer is involved in creating exhibits for museums. In 1993, co-authored by David Chipperfield, a renowned architect, Nick prepared the permanent Plant Power exhibition at the Natural History Museum in London.

In the same year, Knight removed the industry-significant cover of the November Vogue with Linda Evangelista and the caption “glamor is back.” The frame began to personify the sunset of the grunge era.

In 1994, the maestro released another photobook called Nicknight, which collected the best creations of the previous 12 years. After 3 years, the next Flora photo album was released, in which only pictures of flowers are presented.

Since 1997, Knight began working with Dior. This collaboration lasted more than 10 years and had a tremendous impact on the development of both the photographer and the brand.

Nick was such a subtle and relevant artist that sometimes he was even much ahead of his time. At the turn of the century, he launched his online resource on the fashion industry. Since November 2000, SHOWstudio.com has become a unique space for fashion figures. Artists, designers, fashion designers and models – all creative personalities got access to information and the opportunity to carry out various projects. Knight has created an interactive platform that allows like-minded people to create something completely new. The Internet site is very popular, its daily visits reach half a million. Nick often conducts live interviews with creative personalities that are interesting, first of all, to the author himself. Among them are John Galliano, Kate Moss, Philip Lim, Björk, Susie Manks and many others.